Brian Dozier has easily been the Twins' MVP this season, but even he is missing one element from his game that would turn him into a superstar.

Some teams often have a position or two that they seemingly can never fill. One of those positions for the Twins has been second base, a spot on the field that has seen the likes of Luis Rivas, Alexi Casilla, and Matt Tolbert pressed into extended duty. In fact, with the exceptions of Orlando Cabrera and Orlando Hudson, second base hasn't necessarily been a revolving door, but rather a Plinko board where your chips kept landing in the $0 slot.

That has likely changed with the emergence of Brian Dozier, a player that seemingly flamed out at shortstop within his first major league season, but added some power last season while playing second base, and has done nothing but improve since then. It's rather telling when last year's fWAR - regarded as his breakout season - has almost already been bested by his fWAR from this season (2.8 last year, 2.7 this year). In fact, that 2.7 mark leads all major league second baseman right now. Yes, Brian Dozier has been more valuable at second base than the likes of Chase Utley, Robinson Cano, Dustin Pedroia, and Ben Zobrist, all while being paid a fraction of those players.

Dozier has been able to become a well-rounded player. He leads the team in home runs, stolen bases, walks, and runs, along with being second in hits and RBI. His defense has rated as average at second base since making the switch from shortstop. Speaking of defense, while we don't have any solid metrics to measure his arm, I think we could all agree that we've seen no issues with him making double play turns or throwing from up the middle ever since vacating shortstop, so I feel we could say that is adequate as well.

So that means that Dozier is average or excelling in all facets of the game, right? Uhh, not quite. You see, his batting average ranks 17th out of the 22 qualifying second basemen. On the Twins, it's 6th out of the 10 players that have received at least 100 at-bats this year.

But wait, I had just said that Dozier was second on the Twins in hits, so how could he be ranked so high in that category and yet so low in batting average? Well, he also leads the team in at-bats, so that large denominator is bringing his batting average down.

Now, we wouldn't exactly say that Dozier struggles with the bat, considering all those home runs we've witnessed this year. However, this batting average issue has been something that Dozier just hasn't been able to shake, even with all of his improvement thus far, and finding the culprit isn't too hard.

When a player's batting average is low, the very first thing I look at is the batting average on balls in play (BABIP). Simply, this is the batting average when contact is made, excepting home runs. This stat allows us to see whether a player is finding the holes in the field, or if he happens to be hitting the ball at fielders. For example, Joe Mauer's struggles have been well-documented this year. His BABIP this season is at .313, a full 34 points below his career average and a number that hasn't been seen since his bilateral leg weakness season of 2011, showing that it's not just the strikeouts that have hurt him in 2014.

The major league average for BABIP is always around .300. This year it's .298, last season was .297, 2012 was .297, you get the point. Hitters do have a little more control over where their BABIP falls, depending on what type of hitter they are. Line drive and groundball hitters usually have a higher BABIP, while fly ball hitters skew towards the low end.

With Dozier's speed, you'd think he'd be able to beat out a few more infield hits and that BABIP would be much higher than it really is. However, he's at .244 this season and .267 for his career, clearly lower than that circa .300 major league average I mentioned earlier. This must mean that he doesn't get many infield hits, right?

It turns out that's not the case. 12% of his balls in play have resulted in infield hits this year, almost double the major league average of 6.5%. His line drive percentage of 18% is a little lower than the major league's 20% and the BABIP on line drives is significantly higher than the BABIP on grounders and fly balls, as shown in this graphic that I graciously stole from Viva El Birdos. 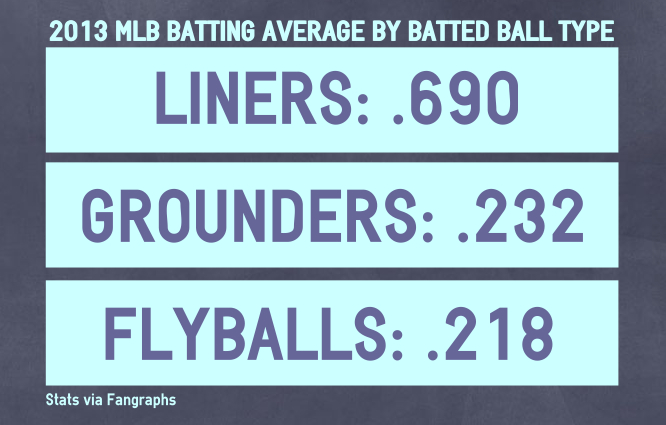 While the small difference in line drives has been an issue, there's another that has been far worse. Dozier has hit 41.5% of his batted balls in the air, with 14.1% of his balls in play resulting in an infield pop-up, which are pretty much guaranteed outs. These numbers are quite worse than the major league averages of 34.2% and 9.5%, and that's really the root of Dozier's low batting average. He hits more fly balls and infield flies with fewer line drives and grounders than your average hitter, which brings down his overall BABIP.

In order to fix Dozier, the obvious solution would be for him to trade some of those fly balls for grounders and line drives. However, this is easier said than done, and it also would change the type of hitter he's become. It's much harder to tally extra base hits when you're hitting the ball on the ground, so naturally we would expect Dozier's slugging percentage and home runs to tail off if he were to attempt to get a few more hits. In this case, it's possible that Dozier is actually doing exactly what he needs to in order to maintain his above-average offense in spite of the low batting average.

Besides, as mentioned at the beginning, he's been the most valuable second baseman in the majors this season. You don't mess with that.