And nobody is surprised.

At the top of the 2014 MLB Draft, there weren't many surprises. Brady Aiken went number one overall to the Astros, Tyler Kolek actually went second to the Marlins, Carlos Rodon was snatched up at three by the White Sox, and Kyle Schwarber went number four to the Cubs. That left popular choices Nick Gordon and Aaron Nola on the board for Minnesota, and as expected the Twins went with Gordon.

Gordon had a spectacular senior season in high school as a shortstop, hitting .512 with a .588 on-base percentage. Those are impressive marks, even in high school, and in spite of a couple of mechanical issues that will need to be addressed most scouts believe he has the potential to be a top-of-the-order bat with a projectable hit tool and very good command of the strike zone. 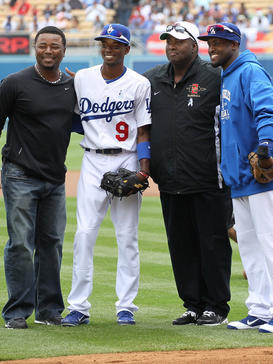 Want to know more about Nick Gordon? Everything you need to know is right here.

What drew teams at the top of the draft to Gordon, however, and what made him a Top Five pick, is his defense. He moves easily with range to both his left and his right, gets rave reviews for his soft hands and his easy motion, and with a good arm is considered an exceptional defender.

Looking back to our scouting report on Gordon, we put together a number of 20-80 scale scouting reports to come up with these current and future ratings for the five tools.

By the rules of Keith Law's explanation, a 50 rating is a "Solid/Average player at the MLB level." A 55 is "One grade above average," or, better than average at that position. A 60 is All-Star caliber. A 70 is a perennial All-Star. And 80 is elite. Looking at that list, it's easy to see why so many teams loved Gordon: He has three All-Star level tools.

It's those tools, which by all account are well-developed, which give Gordon a relatively high floor...provided he hits at all. And that's the real question. If Gordon's hit tools develop, he could be a perennial All-Star who hits at the top of the Twins' batting order. That's where the high ceiling comes in. If he hits just enough, he could still be one of the best defensive shortstops in the league, he'll just hit at the bottom of the lineup.

But that's all if he hits enough. If he can't hit, then this pick will look like a bust two or three years from now.

You can never truly judge a draft until years down the line, and sometimes a decade doesn't tell the whole story. It's why we as Twins fans are still looking at the 2004 draft - how much value can Glen Perkins and Trevor Plouffe deliver? Plenty. For right now, though, Nick Gordon is a good pick for the Twins. There were a number of players worthy of going to Minnesota at number five, and Gordon is certainly one of them.

Dex will be back with more on the Twins' second round selection later tonight.