ARE YOU READY FOR SOME LONGBALLS?

The Home Run Derby started in Minneapolis, back in 1985. In its rookie debut, the derby took on a much different format than what we've been accustomed to seeing over the years. Five hitters from each league took their cracks, with Dave Parker outhitting his contemporaries with six home runs, but it was the balance of the American League that helped to outpace Parker and his National League teammates.

Before we get to who is doing the slugging tonight, I wanted to bring your attention to this cool interactive Home Run Derby tool. It comes from SeatGeek, and it "helps fans determine which seats at Target Field tonight offer the best odds of catching a Home Run Derby ball, as well as which provide the best value based on ticket prices as compared to home run odds."

Here's more on their methodology:

Leveraging data from Hit Tracker Online, we first plotted where all HRD participants' home runs this season would have landed had they been hit at Target Field. Then, we projected the total number of home runs we expect to be hit in this year's competition (based on the new format, historical trends, park factors and more) and came to a projection of total number of home runs hit per section, as well as the average ticket price per expected home run hit for each section.

This is where Dozier's bombs are most likely to land, but definitely head over and have a play. 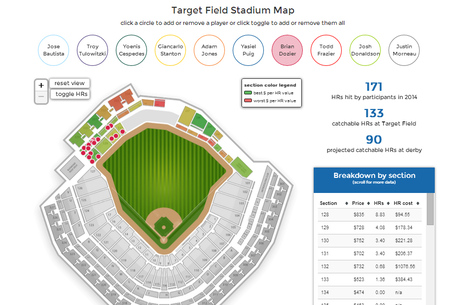 Now, onto the specifics for tonight's neck-wrenching action. Batters will be limited to seven outs instead of ten, which is one of the new rules put in place to ensure that the participants don't flag as quickly. The player from each league with the most homers after round one gets a bye and moves on directly to the semi-finals.