From those who were there: the 2014 Home Run Derby

From across Twins Territory, we asked fans about their experience at Target Field for the 2014 Home Run Derby. Here's what they had to say.

Share All sharing options for: From those who were there: the 2014 Home Run Derby

It's an unfortunate fact that a lot of us couldn't make it to the Home Run Debry at Target Field last night. But fear not! We've gathered a few answers to a few questions sent to a cross section of Twins fandom to get their first-hand impressions from the event. Here's what everyone had to say. If you were there, share your own impressions or photos in the comments.

Where were you sitting?

Lauren: We were in Section 103, Row 5, Seats 19 and 20 - or right field, halfway between first base and the wall. Out of line of home runs, but easy to watch the Jumbotron and see where all the home runs landed.

Topper: I was sitting in the outfield, Section 333 Row 2. Essentially any ball that came to my seat would instantly set a Target Field record for estimated distance. 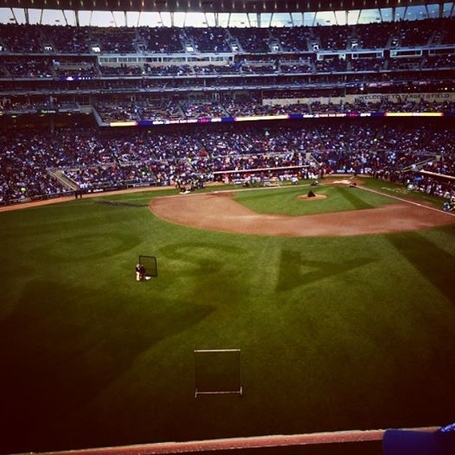 Did you come close to catching anything?

Lauren: Nope. Justin Morneau was the only left-handed hitter, so foul balls were at a minimum over on our side of the field.

Mike: We figured we'd have a few come pretty close, but the closest we had was one ball that landed about one row in front of us and over to the left about half a section. We saw a lot that would have landed near us but landed in the upper deck.

Chad: Stanton hit a ball very close. I did buy a game-used ball from the Derby. It was hit by Morneau. Not cheap.

Steve: Nothing was hit all that close to us, but great spot to watch from.

Topper: Not even nearly. Sometimes balls would arc towards our section with just enough height that got you thinking "maaayyyybe." The person I was with would sit up and reach out her glove in vain but they'd always land below our railing in the 200-somethings. Some balls got lifted into the 300s but those were just one or two sections off the left field foul line. We were closer to center. 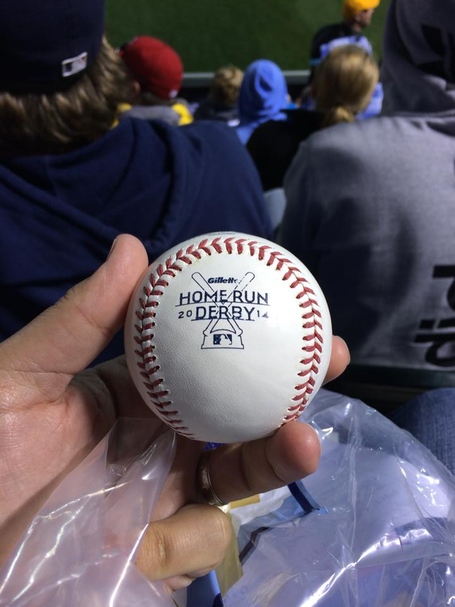 What was the atmosphere like once the rain stopped and the derby started?

Lauren: Festive and energetic. Even though the rain kept coming back, at that point nobody left their seats to take shelter. Everyone wanted to see the action. Good cheers for the 'hometown' boys of Brian Dozier and Justin Morneau, but the rest of the participants received polite applause until encouraged by the announcer or when one of them hit a real long dinger.

Mike: It was pretty electric. Everyone was up with their gloves and ready to catch something. At least in the first round. Excitement seemed to drop in the later rounds. Before the game in the main concourse, it was a mob scene. The new beer vending machines created quite the bottleneck, it took 15 minutes to pass them. I wanted to try a BratDog (which apparently is only in Hrbek's), which is on the opposite side of the park from the bleachers. It took me nearly an hour just to walk around the park once.

Chad: Rain was annoying, but once the Derby started the energy started to pick up. Once Morneau was introduced you could feel the energy.

Steve: Crowd was very into it. Rain didn't bother me at all.

Topper: Did the rain stop? Did it ever stop? I was still pretty damn cold, at least in the outfield. The wind and the damp wasn't enjoyable. A few people in my section left after the swing-off between the first and second rounds, probably because Morneau and Dozier were both out at that point. But honestly it was great. It would take more than a delayed start and bad weather to bring down the Home Run Derby. The ovations that Morneau and Dozier got were great, but it was kind of fun when everyone started cheering for Bautista or Stanton or Cespedes, who all put on some decent power displays. There were Dodgers fans, Oakland fans, White Sox (shudder) fans, Tigers fans, Brewers fans, Yankees fans, and probably many more that I didn't notice all sitting in my section, and when everyone was cheering together for players that aren't on their team, it was pretty cool.

Is there one player or one particular home run that sticks out in your mind?

Lauren: Cespedes and Bautista were the two most exciting hitters of the night. There was a blast to the stands above the batter's eye in center field that seemed HUGE. I believe that was from Cespedes, but I could be wrong.

Mike: I think Stanton in the first round made the biggest impression on my wife and I. A lot of his balls looked like pop-ups that just kept carrying. And then the ball that almost went out of the park. Cespedes was also a lot of fun to watch, he just seemed to keep hitting homers.

Chad: Stanton hit one about 15 rows from the top of left field. That man has some crazy power.

Steve: I think it was Cespedes who launched one about halfway up the third deck in left field. Definitely an "awe" moment.

Topper: Puig sticks out in my mind for failing miserably. There were two poor Dodgers fans sitting in front of me with Puig shirseys and they got heckled a bit. It was sad because I like Puig, but a lot of the people in my section seem to buy into the bad press he gets sometimes. But I remember both Giancarlo Stanton and Adam Jones absolutely hammering some balls up into the 300s along the left field line that I think would have definitely landed out on the commuter rail tracks if there was not obstruction in their way. Longest home runs I've ever seen in person. 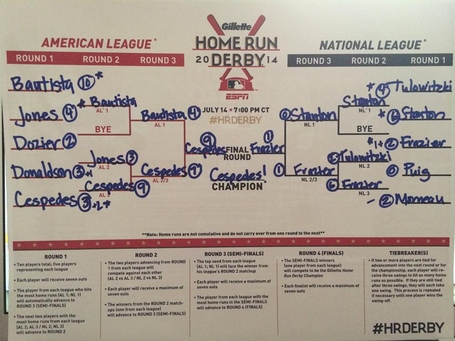 How did you impression of the Home Run Derby change from pre-event to post-event, if at all?

Lauren: It really is different watching on TV. It wasn't as exciting live as I thought it would be. Actually, the entertainment during the commercial breaks was sometimes more exciting than the actual derby itself - high school sluggers, mascot relay races, frisbee-catching dogs, and a drum line created a sense of excitement while everyone at home had to watch another Gillette commercial.

Chad: Was excited before and satisfied after. Sure it was long, but it's something I've wanted to see forever.

Steve: Impression didn't change much - all around good time.

Topper: It was always kind of a throw-away event for me before. I'd catch it if I could or only if Morneau or Mauer were hitting in it. And I think honestly it'll still be that for me, at least when I watch it on TV. But being there and sitting in the outfield, even though I knew I had no chance to catch a home run, that was awesome. And if you've never been and get a chance you have to do it once. It's great. If you love baseball, the camaraderie and sense of fun is like no other. But on TV I don't think you can really get that electricity.

Lauren: The new format didn't seem to work in favor of the first-round leaders - they had to wait around for quite a while between rounds one and three to defend their lead and thus both leaders failed to advance to the finals with Bautista only hitting four and Stanton putting a big ol' zero on the board. At the gates they handed out a bracket that you could fill out as the Derby went along - I had fun filling that out.

Mike: Probably the biggest thing is, it was a great once-in-a-lifetime experience and we loved being there, but after the first round it started to lose its novelty. Personally, the Derby is more exciting with all the ESPN commentary. After the first round (and Dozier and Morneau getting eliminated), the overall excitement for us, and it seemed people around us, started to go down. People around us weren't getting up as often for potential home run balls. But maybe if we'd been in a different area that wasn't getting homers hit ear us we would have had a different perspective, too? If you have the chance to get to one of these or any of the All-Star events, GO! The atmosphere was a lot of fun, it was probably 50-60% Minnesota and midwest fans, but there were a lot of people from around the country, which made it feel a lot different than a regular baseball game/event.

Chad: The Twins and MLB have done a great job with all of the events. Everything has been very smooth.

Topper: The breaks for commercials were way too often and very noticeable. They tried to fill them up the best they could with mascot races, gatling gun t-shirt cannons, high school home run derby swingoffs, etc, but it really just helped to interrupt and lose interest in the actual competition that was going on. It was even more noticeable because we were under the constant threat of rain, and breaking every five to ten minutes for a commercial didn't make a lot of sense if you were at the stadium. Also, Dozier did better than Brandon Inge did when he was in the Derby years ago - and that's all I wanted!