Credit to Minnesota Historical Society. TT has people who volunteer there, so it's OK. 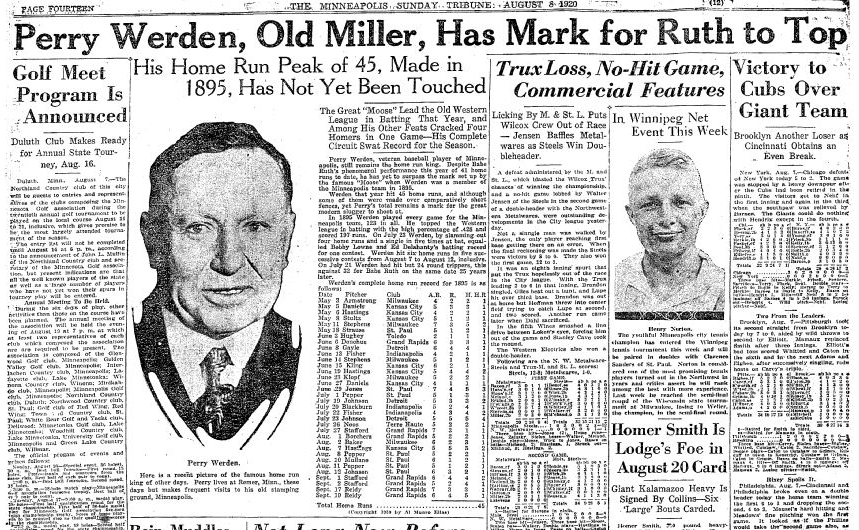 In 1894, a first baseman came from the NL St. Louis Browns to "Flour City" to play for the newly re-formed Minneapolis Millers of President Ban Johnson's Western League. "Peach Pie" Perry Werden was 28 and had played for major and minor league teams for 10 years. After being released by Chris von der Ahe's Browns in early May, the slugger signed for $250 a month with the Millers.

He would soon become a Minnesota baseball folk hero.

This probably apocryphal, but humorous, ready-to-be-made-into-a-silent-movie story, explains how a young Werden got his nickname, and his introduction to baseball, while working on a "pie wagon" in St. Louis:

It was while making deliveries of pies, as the story goes, that Perry stopped to watch a semipro game. One player got hurt, and Perry left the wagon and got into the contest. He hit two home runs and won the game for his team. However, in the last inning, one of the players threw the ball wildly and it struck Perry's horse. The nag ran away, smashed the wagon against a pole and spilled the pies all over the street. The crowd enjoyed the post-game snack. Perry decided to save the boss the trouble of firing him officially by not going back to the bakery.

Werden was big for his day. According to Baseball Reference he was 6'2", 220 pounds. Although he pitched his first year in the majors for the St. Louis Maroons of the Union Association, the right-hander made his reputation by hitting. In seven seasons in the major leagues he had a 118 OPS+. He led his league twice in triples and was a very good base-stealer until he grew too heavy.

Werden had a reputation as a colorful personality. He was an early practitioner of the hidden ball trick and is still one of the all-time leaders. He also one-upped the Hrbek-Gant leg trick.

In the first inning a Kansas City player got a safe hit. Werden took the ball at first base and when the umpire's head was turned, pushed the runner off first and tagged him. The umpire focused just in time to see the tag and called the runner out. He refused to reconsider and the Kansas City manager called his players off the grounds. The ump forfeited the game to Des Moines. The action by Werden would be atrocious by today's standards, but was not unusual in those days when there was only one official handling the game.

From newspaper reports it is clear that Werden got into more than a fair share of arguments with umpires - there is even a report of him slugging a scorer in 1894. (Link, at 18.) As reported by Rippel and contemporaneously by the Minneapolis Tribune ("A Wild West Drama"), in 1895 while the Millers were playing in Milwaukee, Werden needed to be escorted off of the field by two police officers. (Top that, Torii.)

Apparently the entire team was prone to bad behavior that summer. Club secretary Thomas Murphy was suspended indefinitely in July 1895 by President Johnson for throwing a large stone at an umpire that barely missed the umpire's head.

Another article from August of 1895 from the St. Paul "Apostles" reporter tried to paint the crazy scene in Minneapolis:

Did you ever see a base ball game in Minneapolis? If you never did, take a day off Monday and go over to the little sardine box back of the West hotel and see the game. Minneapolis players and the Minneapolis public do not want the best of it. They merely want the game. On the way to the grounds one meets scores of little boys with basketfuls of tin horns. Every Minneapolis man buys one of these, and many buy two, for fear there will be some Flour City man in the enclosure who has not bought himself one. As soon as the clock strikes 4 every man of these Flour City "rooters" sounds his 10-cent horn, and the umpire calls "Play!" The spectators take it for granted at the outset that the umpire is hired to do up Minneapolis, and a riot breaks out when the first strike that a Minneapolis player does not hit at is called. The players all run up around the inoffensive gentleman who is called upon to make decisions, tell him he ought to be shot on the spot, turn indignantly to the crowd, and the latter howls its indorsement. The next ball cuts the corner of the plate, and should be called a strike, but the poor umpire, remembering that it is healthier to be a live coward than a dead hero, calls, "One ball!" and the rioters shout their approval. A little later the umpire, having recovered slightly from his perspiration, calls a strike again. Then the players, from "Bawling" Bill Wilson to "Pretty" Perry Werden, rush up, boiling over with righteous indignation, and get another screaming indorsement from the rioters in the bleachers. Poor umpire! He is beside himself with fright. He doesn't know the day of the week or the state he is in any more. He wonders if he has become insane, or is troubled with strabismus.

(Sounds like more fun than the wave, Twins rooters.) However, according to this SABR article:

[Werden] could take a joke as well as dish it out. On a Labor Day doubleheader in 1894, he put on a tremendous show at the plate culminating in a grand slam homer late in the second game. The fans cheered and the game was interrupted at home plate as Perry was presented with a gold watch. Imagine his consternation when he realized the watch they were presenting to him was his own, one he had received from the Toledo fans in 1889. One of his teammates, for a lark, had taken the watch from Perry's street clothes and passed it to a park official who presented it in a straight-faced manner.

(There is your challenge, Eddie Guardado.)

In 1894, the Millers played at all-enclosed Athletic Park in downtown Minneapolis at the site now occupied by Butler Square, just a block from beautiful Target Field. The distances down the lines at "the little sardine box back of the West hotel" were estimated at 250 feet.

Werden took advantage of the small Minneapolis ballpark dimensions to hit 42 home runs in 1894, at least 24 of them at home (records are spotty, according to the great historian Stew Thornley).

In 1895, Werden topped that by hitting 45 home runs, 37 at Athletic Park. This would remain a professional record until Babe Ruth shattered it by hitting 54 home runs in 1920. By comparison, in 1895 Sam Thompson led the National League (the sole major league that year) with 18 home runs. In one game, Werden hit 4 home runs in 5 at-bats. (Aim big, Sano.)

After late May 1896, the Millers moved from Athletic Park to brand new Nicollet Park. Werden's home run total dropped dramatically in the new park to 18. (He still slugged .607.) The Millers fielded a fine team that year, and won the Western League, including taking a 4-2 "Detroit Free Press" series win over second place Indianapolis after the regular season.

For his great hitting feats, Werner was celebrated and remembered fondly in Millers Territory, being called once by the Duluth paper: "King of the Natural Hitters." 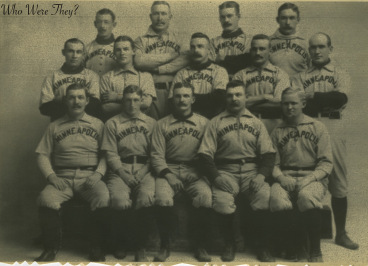 Werden and several other players from the championship Millers were signed after 1896 to major league teams. Werden played his last year in the majors in 1897 with the NL Louisville Colonels. 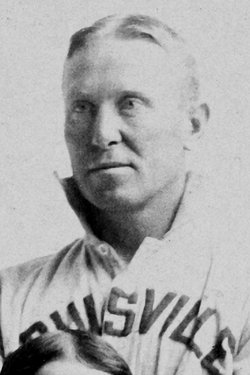 Signed again by the Millers, Werden shattered his kneecap just before the regular season and was forced to sit out 1898. However, he returned to the Millers in 1899. The Millers came in second that year and were swept in the post-season by Indianapolis.

Werden was a part-time player after 1903, when he was 37. From 1909-1919, Werden ran an independent team called Werden's All Stars. Oddly enough for a man who had so many run-ins with umpires, he became a respected umpire for the American Association, the Northern League and finally the Dakota League.

Werner died of heart disease on January 9, 1934 at the age of 68. In a tribute article the Minneapolis Journal emembered "The Moose" and his "superhuman feat of hitting 45 home runs in a single campaign." Wrote the Journal:

The Moose wound up his active career in baseball as an umpire in the old Dakota league. Then he settled down in Minneapolis and was a familiar figure along Fourth street. He could be found talking to his cronies around the Rogers or hibernating in Mike Kirby's billiard room at the Vendome. 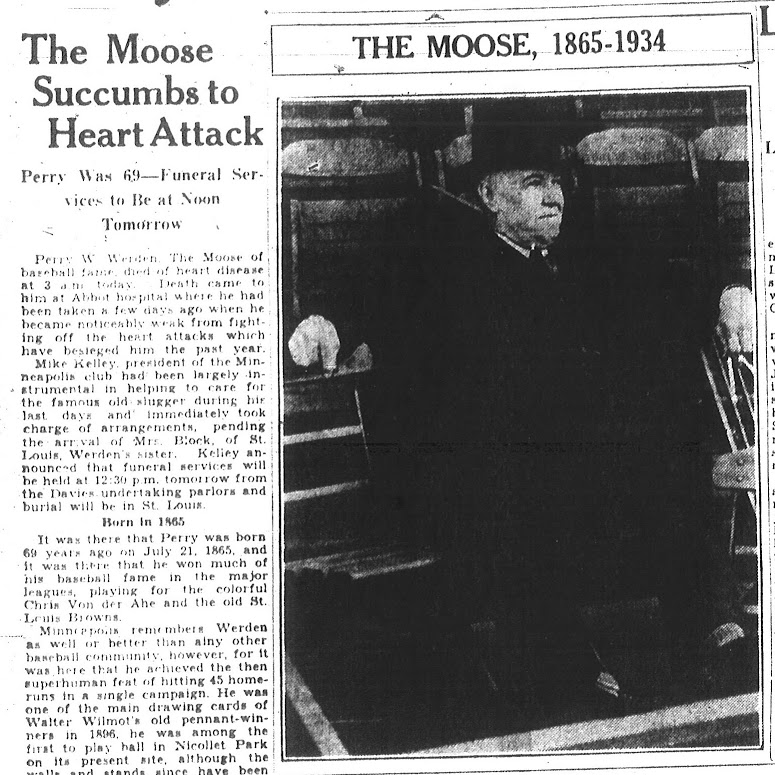 In the summer he never missed a game at Nicollet Park. He would fan with [president and ex-manager] Mike Kelley before and after the contest, he was a friend of all the umpires and no scout ever came to town but that he didn't look up the Moose.

The home run legend was buried in St. Louis.