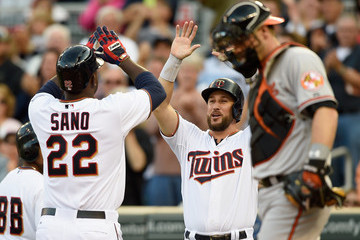 It's been nice over the years to see Trevor Plouffe develop into an above average every day third baseball for the Minnesota Twins. I remember the days when he looked like a complete mess at shortstop and tried to handle some corner outfield positions before solidifying his role as the every day third basemen. It's because of this reason exactly it's time to say goodbye to a type of Twin that is hard to part ways with.

Now the majority of this reasoning is due to the fact that a gentlemen by the name of Miguel Sano has arrived to the bigs and it surely doesn't seem that he's leaving anytime soon. After hitting .455 in his first week in the bigs Sano appears to a player that will be difficult to send back to the minors. He looks more comfortable at the plate than anyone else in the line-up these days and when he gets wood on the ball, the ball travels... FAST AND FAR! Sano has also drawn some walks in his first week in the bigs and with some of the walks turning into game winning runs! Something Mr. Molitor must be loving. I'm sure the strikeouts will come, but with those strikeouts will come some 400+ foot dingers.

So why do we need to say goodbye to Trevor Plouffe? One being Sano will be the everyday third basemen for years to come and the other being his value is fairly high and he comes cheap. The Twins are in need of some bullpen arms, some serious bullpen arms that get swings and misses. Terry Ryan isn't going to trade away any of the prospects in our system because he just doesn't do that, so we'll need to trade away something to get something right? Trevor Plouffe is that guy. He's proven to be a valuable player with above average defense and slugging percentage. Something most teams would die for. Why not put a nice little package together of Plouffe and Pelfrey to get an arm or two to set-up Mr. Perkins in the 9th. Not sure about you but there aren't many arms I trust out in that bullpen right now, J.R. Graham might have moved himself into the #2 slot of bullpen arms I like. The single reason we didn't sweep Kansas City in that 4 game set is due to our bullpen being less than spectacular and not near the quality of Kansas City's. Blaine Boyer and Aaron Thompson both come to mind.

It's about building a team to compete, an entire unit that performs best together. Trading Plouffe and moving Sano to third everyday will free up the DH space where we can look to add another bat at the deadline or perhaps bring back up Oswaldo Arcia who is hitting the ball harder in the past two weeks than he ever has in his career.

What happens if Sano falls into a slump and the Twins need to send him back down to build up some confidence? Escobar and Nunez have both proven to be just as valuable as Plouffe when in the line-up everyday. Let's take our chances that Sano is here to say and solidify the biggest need to for the Twins at this moment!

Sorry Trevor, we love you and will cherish everything you've done for the team - but sometimes this is just part of life as a big leaguer. We'll miss you and your lovely wife Olivia!