Growing up in Fergus Falls, MN, Twins games (then at the Metrodome, of course) were rather few and far between. 4-5 a year...tops. Each game I went to was an event in and of itself.

The year Target Field opened, 2010, my family relocated to Forest Lake, MN, and games were able to be more frequently attended. For those early years of Target Field, StubHub and the Northstar Train became my best friends.

In 2014 I moved to Burnsville, where I am just a short drive from the Blue Line light rail. As such, my game attendance increased even more rapidly. However, I also began getting tired of buying cheap seats and evading ushers in search of better ones (that guy policing the back of Section 120 has it out for me, I tell ya).

So, before the start of the 2016 season, I finally decided to pull the trigger on a 20-game season ticket package. Section 319, Row 3, Seat 1 had my name it on. After the incredibly exciting summer of 2015, which saw the Twins in the playoff hunt until the final weekend of the season, I figured I was in for similar good times.

Let's take a look at a few of my personal "statistics" from the 21 games I ended up attending at Target Field this year (I won't be getting to any more this weekend):

-6 wins, 15 losses. That's a .286 winning percentage, folks. Demonstrably worse than even what will surely be the worst Twins team of all time.

-In a season where Brian Dozier is a home run monster, I saw him hit...five. And that included three in one game (which was cool, obviously, but also shows how few games I saw him actually homer in).

-The starting pitchers I see each year always fascinate me (as a younger man, I was cursed by perpetually seeing Kyle Lohse and Carlos Silva despite my man-crush on Brad Radke and obvious desire to see Johan Santana). So, here are the men I saw toe the rubber in the first this year:

-I did not see the Twins shake hands after July 3rd.

Suffice it to say, there wasn't a whole lot to cheer about baseball-wise for me this season. When your favorite team starts out 0-9 and it isn't their longest losing streak of the season almost by half, it's going to be tough sledding.

Fortunately, I love baseball (it's still my favorite sport, barely edging the NFL) and I (still, remarkably) love the Minnesota Twins. As such, there was still fun to be had during the "ballpark experience" in 2016, including...

-Phil Hughes getting a unique six-inning shutout when the game was called due to rain.

-Ichiro slapping three hits against us in one game during his final season...

-Watching the Twins beat the Phillies 14-10 in a circus game (one that we actually won; a rarity)

-Seeing John Gordon inducted into the Twins HOF (got "a little dusty" up in 319 that day, lemme tell ya) 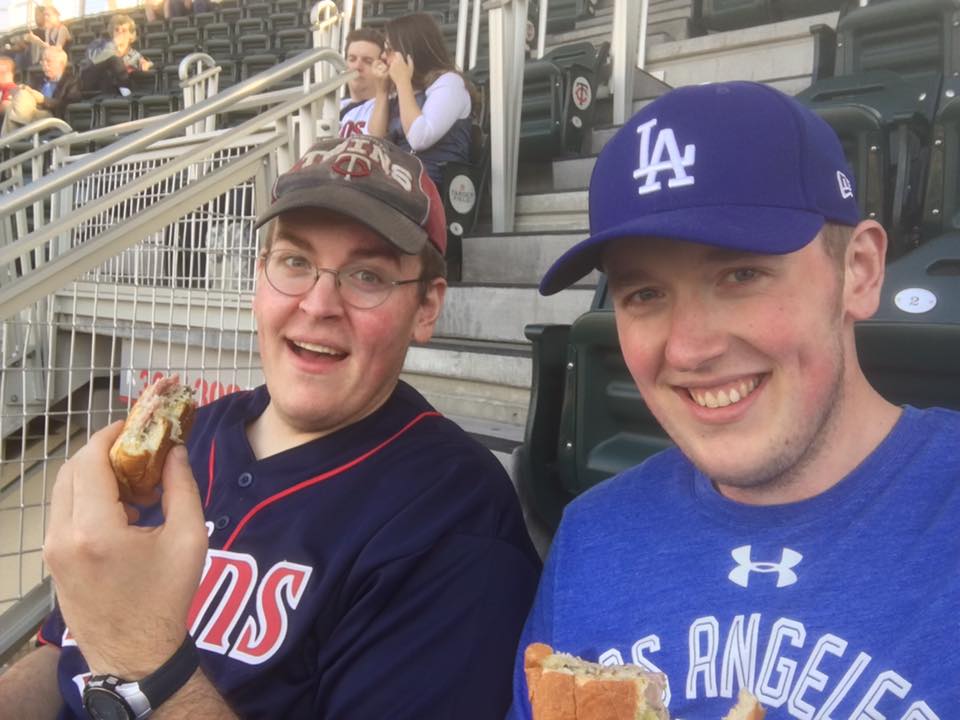 (Yes, my brother is a Dodgers fan. He currently lives in LA, so at least he has an excuse).

-Introducing my forthcoming niece to the ballpark experience:

(Not that she'll remember much, but that's just a good excuse to get her there again soon!)

So, despite all the losses and frustrating baseball, I still managed to have fun. I don't like seeing the Twins lose any more than the next big fan, but I try not to let it discourage me from baseball altogether, because it is something I enjoy so much. You know how people say "even a bad day of fishing is better than a good day at work"? That's how I feel about seeing a baseball game.

Due to a unexpected vehicle purchase (and the requisite bill that will be showing up each month), I'm not sure if another round of season tickets will be in the offing for 2017. Rest assured, though, that I'll still be attending my fair share of Target Field contests next year, by hook or by crook.