I grew up in Fergus Falls, MN, where I lived until 2010. The Twin Cities are a good three hour drive from FF, so I made it to about 5-6 Twins games (tops) each year. TwinsFest was normally out of the question, but fortunately the Twins Caravan always made a stop in my town. Each January, I would look forward to a few members of the Twins stopping by to chat about the upcoming season. One year (2009, I believe) I even braved a temperature of -26 degrees F (try getting a 1992 Ford F-150 pickup started in that weather!) to head to the local Applebees for the caravan stop.

One year, however...2005...I actually made it to TwinsFest at the Dome. Unfortunately, the experience was not a great one for me:

-It felt weird being at the Dome without, you know, a baseball game actually going on.

-I hate being crammed together with other people in general (proof of this: I've never been to the MN State Fair either).

-I absolutely WILL NOT pay a cent for an autograph of any kind.

-I couldn't really participate in any of the auctions, as I'm not a wealthy man (then or now!)

Another very specific memory I have is of meeting Kent Hrbek at some kind of booth and having him be a total jerk to myself and the family members with me. I mean, just totally aloof and checked out from the proceedings around him. It has colored my view on Hrbie to this very day (hopefully I just caught him on a bad day, though).

Since that point, I have not been back to any TwinsFest (either at the Dome or Target Field). I'm not against the concept of the event by any means, but it really just isn't for me. In all honesty, I think the main reason is that it just feels so weird seeing the Twins "out of context" (not actually playing baseball). Perhaps my favorite thing on this Earth is catching a Twins game at Target Field, so TwinsFest always seems like a cheap substitute to me.

Even with all of that being said, however, I do have a couple of positive memories from that 2005 TwinsFest:

-Basically brushing shoulders with Brad Radke (my favorite Twin at the time) in the Dome concourse and having a mini freak-out.

-Buying the book "The Cool of the Evening" (about the 1965 Twins) from the author at a booth. Great book.

-Watching the 2004 Twins highlight video to get me excited about the upcoming season (if only it had gone as well).

Bottom line: I don't begrudge anyone who has a great time at TwinsFest...but it just isn't my scene. It's the same reason why I don't watch many special features of my favorite films, as when I do the magic dissipates a bit. Twins baseball at Target Field holds that same magic for me, and I actually prefer not to see the man behind the curtain. 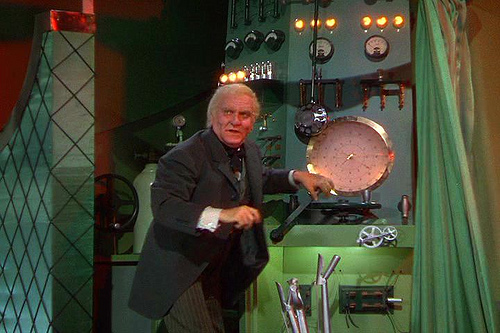