I think most Twins fans in the waning moments of free agency and the last few day’s lull before spring camp begins are hoping for a late signing to sure up the starting rotation. Well the current front office regime has become known for last minute free agency splashes and steals, I do not believe the squad will be welcoming a last minute big name at this point. The current state of the payroll and comments from the front office indicate the heavy lifting is done. However, it can’t hurt to do a quick review of the top options remaining to fill out Minnesota’s five starting arms.

As of this writing the top four stands at Maeda, Berrios, Pineda, and Happ barring injury or suspension before April (Knock on wood). These four alone project to be a solid rotation for a team set to defend a division title, but the final spot could be considered up in the air. As I see it the top remaining options to fill out the rotation at this point in the baseball calendar are James Paxton (Signed by the Mariners during the writing of this), Jake Odorizzi, Taijuan Walker, or incumbent Randy Dobnak.

In order to do a quick comparison of the comparative value of these options I took their career WAR and divided it by total innings pitched, shown in figure 1. This number gives some idea to the wins each pitcher provides above the average player per inning pitched if they pitched at their career average level. 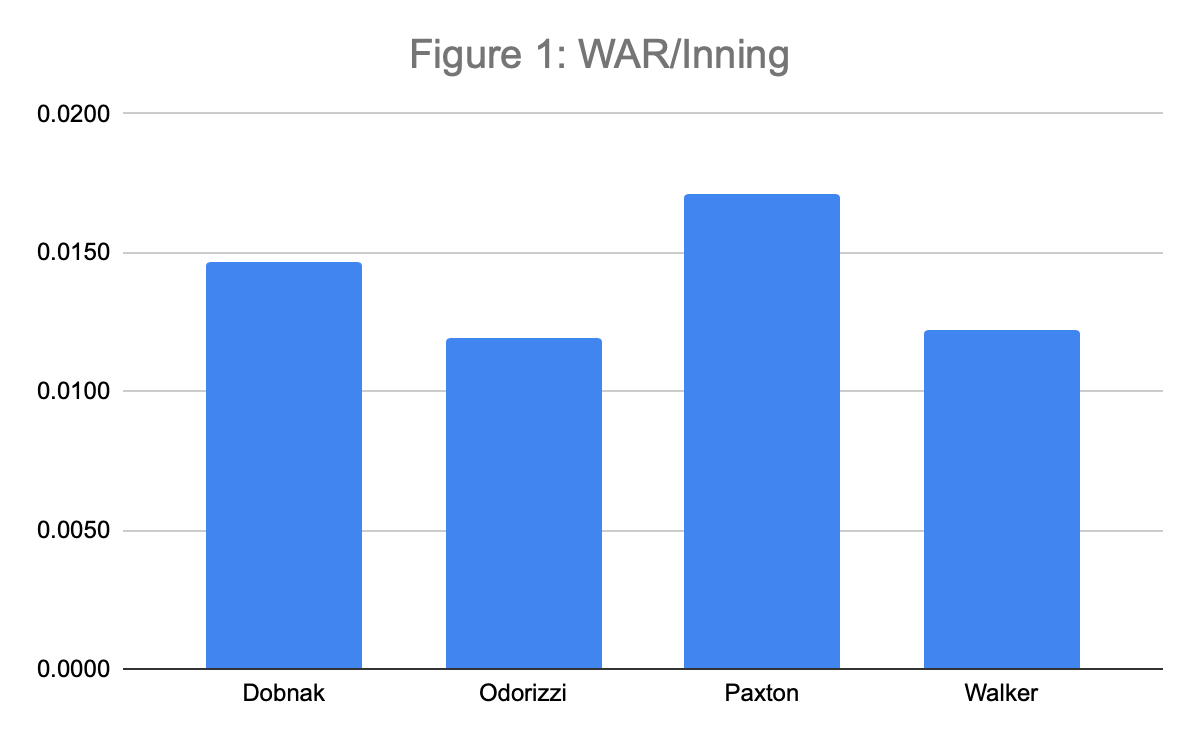 To put more meaning to the numbers I then projected each would pitch 166 innings in the coming season, the average number of innings for the Twin’s top five starters in 2019 (the last full season) demonstrated in figure 2. Using my very basic calculations Paxton comes out on top with a 2.84 WAR, followed by Dobnak, Walker, and Odorizzi. To give context for these numbers, Odorizzi in his 2019 All-Star season had a WAR of 3.6. 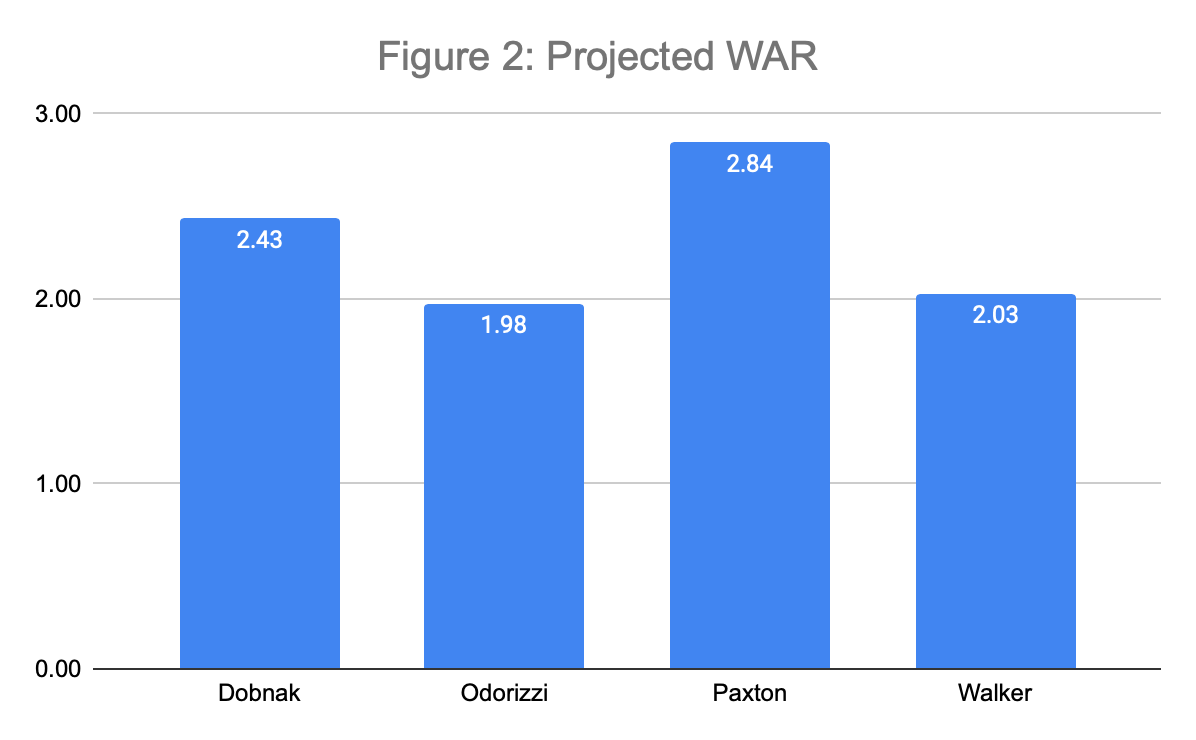 Now to round out this exercise I did a very basic cost/benefit analysis shown in Table 1. From our above WAR calculations I computed each pitcher's projected value for the coming season. According to Craig Edwards at Fangraphs, the costs of a win in recent free agency has been about $8.6M (https://blogs.fangraphs.com/the-cost-of-a-win-in-free-agency-in-2020/). Multiplying that by each player's WAR we come to a projected monetary value for each. Now this dollar number is not the amount each player should be offered for the coming year, due to multiple player market inefficiencies, but rather the number each pitcher would make in a perfect world if they played to their exact projected value. We already know that Dobnak will make slightly over half a million in the coming year, which could be great value if he pitches as he has. The others I would guess will make $8-10 million when all is said and done, all providing value in comparison to their worth, but none to the degree of Dobnak.

Now it's time to round back to why I have called this an imperfect analysis. As I have said a few times before these are very rudimentary calculations. The numbers above do not address sample size, wear & tear, age, market failures, etc. Paxton and Walker (and Odorizzi to a lesser extent) have health issues that call into question their abilities to perform at high-levels or even stay on the field. Dobnak has only 75 career major league innings to his name, providing some doubt to his consistency. For these reasons, among others, all of the names above provide some risk underrepresented in the projected numbers. To bring some corrective thought into the mix I believe Odorizzi’s projection is under-represented due to early career numbers carrying equal weight to recent success. I also have a hard time believing Dobnak is #2 in this group and chalk that up to a small sample size.

My own personal ranking of preference would go 1) Odorizzi, 2) Paxton, 3) Dobnak, 4) Walker. But, if I were to guess the outcome of the final rotation spot, I think it is likely the Twins bring in another low-cost veteran starter or two/minor league deals to compete in camp, ultimately handing the final job to Dobnak.

Who would you like to see get the final rotation spot?